Note: If you instead want to understand how a categorical explanatory variable affects a quantitative (or continuous) response variable (like, how the species of plant affects the plant's leaf measurements), check out this previous post, where we use the ANOVA statistical test instead.

To get started, we'll be importing a few important libraries. We'll be using the mpg dataset, which seaborn conveniently makes available to us as a pandas data frame. The mpg dataset gives the miles per gallon (mpg) of a few hundred cars, along with some characteristics of the cars, like the number of cylinders that make up the engine, the horsepower, weight, and so on.

Since the chi-squared test needs two categorical variables, we're going to convert the mpg variable into a grouped category. We'll split mpg into four different groups: those cars with mpg between 10 and 19; those with mpg between 20 and 29; 30 to 39 and 40 to 49. We'll keep the raw mpg as reference.

This is what the first few rows of our new dataset look like:

How it actually works

The chi-squared test operates on a contingency table. This is where we group our observations into categories, and count the number that fall into each combination of variables. In our example, that means looking at the dataset and finding all cars with four cylinders. Of those cars, we then count how many were in the 10–19 mpg group, how many were in the 20–29 mpg group, and so on. Then, we move onto cars with six cylinders; of those, we count how many were in each mpg group. We end up with a contingency table that shows the frequencies of observations in each combination of variables. We can use the pandas function crosstab to generate our contingency table:

Our hypothetical explanatory variable lies along the top row. We are thinking that the number of cylinders might affect the fuel efficiency in mpg of the cars in the dataset. Looking at our table, for cars with a fuel efficiency of between 20 and 29, 112 of them have four cylinders. Only 34 are six-cylinder cars, and a measly five are eight-cylinder cars. Maybe we're onto something here.

Another way to look at it is by looking at percentages, rather than counts. To do this, we'll divide the counts in the contingency table by the column sums:

Alright, the output looks pretty confusing, but we're only really interested in the first two numbers. The first number, 280.79, is the chi-squared statistic. The higher the number, the larger the relationship between the explanatory and response variables. A number this high means a pretty good relationship! The second number, 1.06e-57, is the p-value. This is small, so this chi-squared result is almost certainly not just by chance. Great!

Of course, we always want to draw some nice plots, and we should probably check that the data actually agrees with our statistical conclusions! So we can make a plot that shows the effect of cylinder number on fuel efficiency, using the means of the raw mpg numbers from the original dataset: 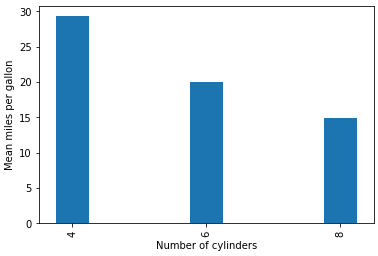 Yep—looks like the cylinders do have an effect on the fuel efficiency! (Okay, we've totally just done this completely back-to-front: we would normally find something like this when we're doing our exploratory data analysis and making a bunch of plots, hoping to see some interesting relationship between variables. After we've discovered something like this, then we go and do some stats to check whether the relationship is significant or not. But sue me.)

In my previous post on ANOVA, I talked a little bit about why we can't just compare each category separately without applying some sort of correction to account for the family-wise error rate. For that case, we used Tukey's correction. Here, however, we're going to make use of the Bonferroni correction to account for the effect of multiple comparisons on the chance of coming up with a false positive. With this technique, we simply divide the desired p-value (say, 0.05) by the number of comparisons being made. In this case, we just have three comparisons: four and six cylinders, four and eight cylinders, and six and eight cylinders. Therefore, our adjusted p-value is 0.05 / 3 = 0.017. This means that we'll only consider a comparison statistically significant if the p-value is less than 0.017 (rather than less than 0.05).

Finally, we're just going to create a list of combinations to loop over. For each iteration of the loop, we'll subset the data to only include that particular combination of cylinders, and create a contingency table using that data. Then, we'll run the chi-squared test on the contingency table, comparing just two levels of the cylinder variable at a time. 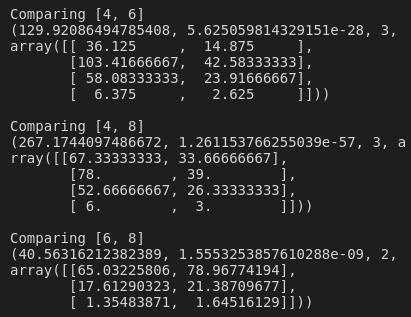 At this point, we try not to think about the fact that we intuitively knew that already...