You do test your code, right? With devtools::test()? Or maybe R CMD check if you're feeling frisky?

We can use GitLab's free shared runners to test our packages for us when we make commits. We should be doing this ourselves anyway (see above), but if we forget, this can be a good stopgap. The utility of these pipelines increases if we're doing more advanced things, with a build–test–deploy workflow, so things could get really exciting if you want them to. This post will just look at the basic syntax for getting started with a GitLab pipeline for testing your R packages.

That's the name of the file. You write YAML to describe your pipeline. Create that file in the root path of your package. The easiest way to test these is via GitLab's browser interface, using the pipeline editor.

The first step is to set the Docker image. Using prebuilt images will speed up our pipeline tremendously. You could use the r-base Docker image, but for our purposes, using the rocker/tidyverse image will make things even easier because it comes with devtools installed. (devtools is the R package that everyone (?) uses to build and test R packages. It has a metric shittonne of dependencies, so installing it ourselves from source can literally take ten minutes and you could get into some fun dependency shenanigans. Let's just let rocker sort that out for us.) Anyway, so... this is the first line:

Next, we set the stages. This is where we define what stages of CI/CD we're going to use. We're basically just going to test and install our package; we could split the install and test stages out, but for simplicity let's just keep them together. So we set one stage:

Do note the two-space indentation. Coming from R where spaces mean literally nothing, YAML is suuuuper strict. At least the pipeline editor will let you know if the syntax is valid or not!

Finally, we define the actual test job. Again, this is pretty straightforward. We could just run devtools::test() here, but for the sake of completeness let's also run R CMD check. Note that the script part is a shell script, so for the CMD check we run it normally as if from the terminal, but for the devtools check, we use the R -e ... syntax to call R from the shell. I also like to specify --no-manual because I probably don't (and you might not) have a manual for your R package, so this just removes one potential error.

And that's pretty much it. When you commit the change in the pipeline editor, scroll up and you'll see that it's checking the pipeline status. 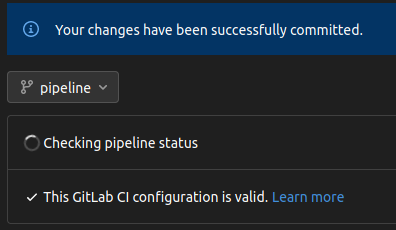 After a few seconds, it'll say that the pipeline is running. On the far right, click "View pipeline".

That'll bring up your pipeline, with all your separate stages available to view. Click on the "test-job"—it may have passed already—and it'll bring up the shell output of the actual test. 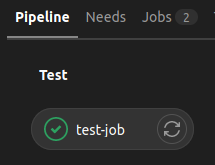 We can also split the test and install processes into distinct steps. That might look something like this (in its entirety):

The world is your oyster, or something.