How to filter several variables with the same condition in R 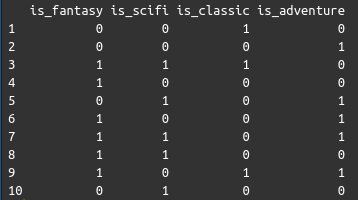 Say we want to filter on books that are classic, fantasy adventure novels. We could do this:

The across function from dplyr is, in my view, one of the most useful functions in R. I find myself using it most frequently in combination with mutate and filter, to apply a function across several variables. I encourage you to check out the vignette for it to get an idea of how powerful it is when used in dplyr workflows; but I promised that this post would be brief, so here's how you can use it to filter several variables with the same logical condition:

This is the same filtering logic as above, just a little bit cleaner and more extensible. Some notes:

Let's just write this out with the arguments explicitly provided and a pedantic level of indentation, just to be super clear about how it all fits together:

That's it—I'll probably write some more about dplyr in the near future.